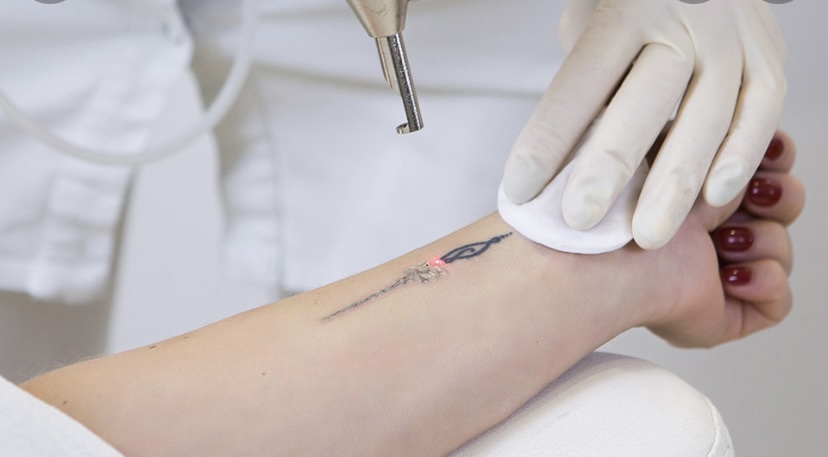 What is Tattoo and Pigment Removal?

The “Q” in Q switch laser treatment stands for Quality. A Q switched laser pulses high power laser beams with such precision that they don’t have any thermal interaction with tissues. This means that it produces minimal damage to surrounding tissues internally and targets only the tattoo ink pigments. An added benefit of this is a quicker and less complicated healing time. The Q switched laser has been determined as a gold standard for tattoo removal. It works by producing extremely short pulses of high energy light. The light is then absorbed by the particles of the tattoo pigment but doesn’t get absorbed by the surrounding skin. The tattoo pigment then heats up and starts to break down into small particles. A Q-switch laser may also be used to treat pigmented lesions including age spots, freckles, sunspots, and some birthmarks. It targets the melanin in the superficial layer of your skin. When the pigmented lesion absorbs the light energy from the Q-switch laser it gets converted into heat.

What is unique about the Q-switch tattoo removal?

A Q-switched laser is the only technology that is able to penetrate down to the dermis and shatter tattoo ink (via photo acoustic waves) without causing damage to the surrounding skin tissue. All other methods either aren’t capable of reaching and destroying the ink or cause too much damage to the skin, resulting in scarring. The 1064nm and 532nm cover over 80% of tattoo colors.

What are some indications for the Q-switch?

What color tattoo’s can be treated?

WHAT TO EXPECT?
The laser tattoo removal itself may not be uncomfortable but discomfort is a normal response during treatment and recovery. The targeted areas will feel tender and sensitive to touch due to swelling and blistering thereafter. Once these effects subside over the next few days, so does the pain. Immediately after treatment, you will notice frosting on the area where the laser came in contact with the ink. It is caused by the rapid local heating of skin pigment releasing carbon dioxide on the surface of the skin which resembles white frosting. This signals the first stage of healing and it lasts for only a few minutes. More frosting occurs with dark ink compared to lighter ink. This is accompanied by swelling around the treated area. Redness, tenderness, and swelling usually subside a day or 2 after treatment. Blisters start forming within 24 hours after treatment and they may appear alarming, but these indicate that your body is healing as it should. Avoid picking on your blisters because they will drain on their own and dry into scabs. The crust will eventually fall off within 10-14 days after treatment granted that the area doesn’t get irritated. One may even return to your usual activities shortly after treatment. The area will be bandaged to keep it dry for a few days following the treatment.

HOW DOES IT FEEL?

Laser tattoo removal typically does involve some level of pain. That said, many say that it hurts less than they expected. It is a common belief that tattoo removal is excruciating, yet most patients say that the sensation of removal is comparable to having a tattoo applied. Common descriptions include the sensation of a rubber band snapping against the skin or bacon grease- basically it is uncomfortable but bearable.

Avoid sun exposure/tanning beds for 2 weeks pre and post treatment. Avoid pain medicine, such as Aleve, Aspirin, Ibuprofen NSAIDs for 3-7 days prior. Topical numbing cream or local anesthetic may be used and cold compress may be applied prior to treatment.

HOW LONG DOES A TREATMENT TAKE?

Depending on the size of the treated area(s), after numbing, treatments can take several minutes up to an hour. The number of sessions needed to remove a tattoo depends on 3 factors: the age of the tattoo, the color of the ink, and the density of the ink.

When will I see results? How long do they last?

The sessions are spaced 6-8 weeks apart, which allows your skin to process the treatment. Many people start to see their ink fade slightly after each subsequent session and greater improvement after 3 treatments. Given 6-8 weeks between each treatment, you can expect the results to start showing a few months after the process starts.

How many treatments will I need?

Yes, but you might have some discomfort in the area, blistering, swelling, etc

Are there any side effects?

There are a handful of symptoms you might see post-treatment such as blisters, swelling, raising of the tattoo, pinpoint bleeding, redness, temporary darkening, hypopigmentation, hyperpigmentation, and bruising. These are common and usually subside within a couple of weeks. As always, consult your practitioner with concerns.

How much can a treatment cost?

In genera, it costs about 10 times as much to get a tattoo removed as it costs to have it applied, so there may be some sticker shock. A small tattoo starts at $200/treatment

Who is a good candidate?

You must have realistic expectations with your tattoo and/or pigment. It may never be 100% clear.